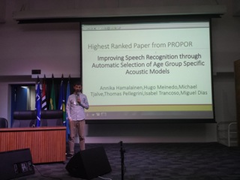 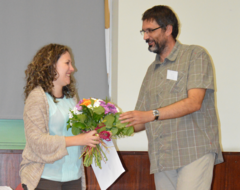 Project VITHEA (Virtual Therapist for Aphasia treatment) is part of an exhibition on mental health that will be inaugurated October 30th, 2014, at the Pavilhão do Conhecimento. For more information see [1].

Isabel Trancoso was appointed as ISCA Fellow for "her research in speech coding and significant and sustained contributions to speech science and technology for the Portuguese language".

Alberto Abad Gareta and Anna Pompili have appeared on the news again for their work on VITHEA (Virtual Therapist for Aphasia treatment).

Scientific Award - Fernando Batista was one the winners of the 2013 edition of the ISCTE-IUL scientific awards with the work "Bilingual Experiments on Automatic Recovery of Capitalization and Punctuation of Automatic Speech Transcripts" published in the IEEE Transactions on Audio, Speech, and Language Processing.


Alberto Abad Gareta and Anna Pompili have received a prize for their work on project VITHEA (Virtual Therapist for Aphasia treatment). 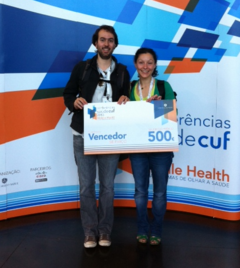 Fernando Batista and Ricardo Ribeiro took part in a experimental evaluation campaign on sentiment analysis based on short text opinions extracted from social media messages in the context of TASS - Workshop on Sentiment Analysis at SEPLN (satellite event of the SEPLN 2012 conference). The obtained results ranked them in
- 1st. place in "Trending topic coverage";
- 2nd. place in "Sentiment Analysis".


Scientific Award - Ricardo Ribeiro was one the winners of the 2012 edition of the ISCTE-IUL scientific awards with the work "Revisiting Centrality-as-Relevance: Support Sets and Similarity as Geometric Proximity" published in the Journal of Artificial Intelligence Research.